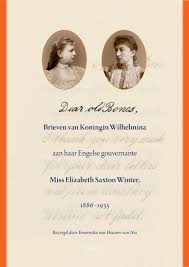 Earlier this week, NRC Handelsblad, one of the Dutch quality newspapers, published a review of a book called Dear Old Bones. Brieven van Koningin Wilhelmina aan haar Engelse gouvernante Miss Elizabeth Saxton Winter 1886-1935, edited by Emerentia van Heuven-van Nes. Fantastic, was my first thought: I’m doing research on the English of Dutch learners during the Early Modern period, so here was the promise of letters written during a period of some fifty years, which would enable us to study the progess which this English learner would undoubtedly have made in the course of those years. There is a promising snippet of text, which shows interference of French spelling:

I thank you very much for your dear letre and for your good advice to write with flourishes.

Nothing could be further from the truth: the letters are not edited but translated, as indeed Ileen Montijn, the reviewer, comments (I translate, and paraphrase a little):

Though never previously published and admirably annotated, the letters are translated (except for the opening and closing formulas). What a shame: at times you would love to know what the original letters read, for instance, when Wilhelmina enquires about the state or “your dear old head [?]” [kop, in translation, a very impolite form to use].

But perhaps the translator first transcribed the letters before translating them. Dear Emerentia van Heuven-van Nes, did you? And if you did, would you be willing to share the text so that we can do research on the language of the letters here at Leiden?