Posted on September 4, 2014 by Ingrid Tieken

About a year ago, I gave a workshop to our second-year students here at Leiden on eighteenth-century letter writing. To practice their newly acquired skills, the students had to produce a transcription of a letter by Sir Joseph Banks (1743-1820), whose letters are available online through the website of the State Library of New South Wales. I promised that the best transcription would be published in this blog, and it was.

But there was a runner up, the transcription of a letter by Banks to his sister Sophia Banks, by Natasja Kosten and Kyra Macfarlane. The reason for this was that the students had taken the assignment to transcribe the text as closely as possible very literally, reconstructing the way the original letter had been folded: 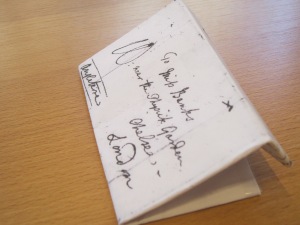 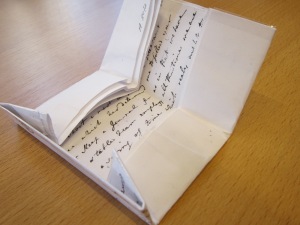 One of the reasons I personally like this letter is that there is a reference to Banks travelling from The Hague (“a most beautiful town”) to Amsterdam by “Track Shoot”. Originally, Natasja and Kyra had been unable to identify the word, and no wonder, but that is what it is, an idiosyncratic rendering of the Dutch word trekschuit, defined by the Oxford English Dictionary as “A canal- or river-boat drawn by horses, carrying passengers and goods, as in common use in Holland; a track-boat” (s.v. trekschuit, treckschuit). The earliest quotation dates from 1696, and here we have another one for the eighteenth century. Banks’s spelling is not in the OED though.

Here is the transcription of the letter by Natasja and Kyra: Sir Joseph Banks to Sarah Sophia Banks.