The varying degree of formality in John Wesley’s letters

In the course Letters as Sociohistorical-Linguistic Documents, we have learned that social status was of great importance in the late modern English society. Therefore, it comes as no surprise that especially experienced writers applied a variety of different styles to their letters, depending on their relationship to the addressee. We read about that, for example, in Palander-Collin (2008), who analysed letters from the 18th century in terms of linguistic register variation.

So far, so good: When I was working on a totally different assignment for another course, I came across the LIWC tool that analyses texts word by word and groups all words into at least one of 68 categories. Using this tool, the researcher can easily get some first hints at the degree of formality given in the text.

Why not apply it to some old letters? Let’s see if the tool is able to analyse them…

I picked John Wesley’s letter to Ann Avison from April 20th, 1767, as well as his letter to Sarah Wesley from June 28th, 1758, his letter to Joseph Benson from May 19th, 1783, and his letter to Ebenezer Blackwell from May 7th, 1760. To my knowledge, the relationship between Wesley and the women was quite personal, while the contact to Benson, but especially the contact to Blackwell, was more of a formal kind. Is the LIWC tool able to reveal this? 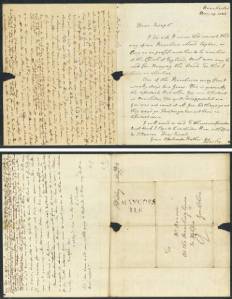 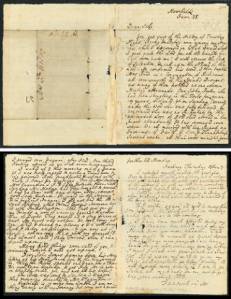 Well, the results are a bit ambiguous, since only the letter to Blackwell could be clearly categorized as formal. For the other letters, there is a tendency towards ‘personal text’.

Nevertheless, there are some interesting points: All four letters have a very high percentage (10.49 – 11.82%) of what the tool regards as ‘social words’. For comparison: An average contemporary formal text contains 8.0% of social words and an average personal text 9.5%. Thus, the amount of social words in the analysed letters is unusually high for today’s standards. I can imagine that this is due to the numerous references to family, friends, etc., and to the expressions of affection and politeness found in late modern English letters.

All in all, I think the LIWC tool is an interesting means for a first rough analysis of letters, especially in quantitative studies. For the letters I analysed, it showed that Wesley indeed could alter his style to some extent, depending on the relationship he had with the addressee. Hopefully, I will have the time to do a more detailed analysis. However, until then it should be kept in mind that I applied the tool to only four letters, so the results should be taken with caution.

The images of the letters are from the digital collection of letters of the Bridwell Library: http://digitalcollections.smu.edu/cdm/search/collection/jwl